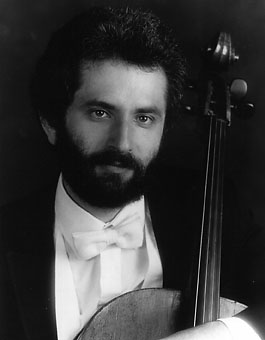 TJ: First of all, please pronounce your last name.

TJ: Where does your name come from?

DT: It's derived from Russian. I admit that it's an unusual Russian name. I've never met anybody in Russia with the same last name. But I have met several people in Seattle who trace the origin of their names back to my name. It roughly translates as "slender legs."<

TJ: Were your parents musicians?

DT: No. My mother was a historian and my father was a factory worker.

TJ: When did you start playing the cello.

DT: I started playing the cello when I was 9.

TJ: Were you started by your parents?

DT. Not really. I liked music in general. But I did not particularly like to practice the cello or study music. I wasn't a good cello or music student for years. I went to the Gnessin music school, where I studied music theory, history, and obligatory piano lessons.

TJ: Did your parents force you to go to this school?

DT: Right. In fact, for four or five years, I was one the weakest students in my class. At the age 13, however, I all of a sudden became the best student in my class. I took music theory and composition classes seriously and I started listening to lots of music. It all happened during one or two years. It was during this time that I started to practice, and music started to make sense. My experience has served to remind me to be a tolerant teacher, since one never knows when a student may all of a sudden blossom.

Cello was always part of a more broad look at music. I always practiced because I was interested in playing a certain piece. Now as a professional, it's a little different. I must force myself to practice from a more technical standpoint in orchestral passages without the same emotional involvement.

TJ: Did you have any other interests?

DT: All interests for a normal teenage boy.

TJ: Is your education primarily in music or did you study other subjects?

DT: For nine years I went to a normal public school and then I switched to a musical high school, where music was the focus. We also had to study the sciences, history, and literature. Then I studied at the Moscow conservatory, where I received my Masters and Doctorate degrees.

TJ: In Russia, do you choose your field or is it chosen for you?

DT: You don't have a choice.

TJ: Did you resent not having a choice?

DT: I did at the time. But looking back, most of what we did made sense. A narrow field is great when you are a professional. But most of the really great performers are very open minded. Look at Casals or Rostropovich or Yo-Yo Ma and how they're active in many different musical fields. It shows a lot to me. A professional who concentrates on a very narrow road cannot go far on this road.

TJ: Did you have any musical idols when you were growing up?

DT: Natalia Gutman, a Russian cellist, had a huge impact on me.

DT: I am speaking of people that I heard live. Casals I have only heard in recordings. I started to appreciate Casals as I became a more mature musician. And still, year after year, I appreciate Casals more and more. At age 13 or 14, I was listening for superficial things such as technique. A lot of little things that Casals disregarded as unimportant were very important to me at that point in my life.

TJ: Why did you come to the United States?

DT: For many reasons. And I am happy that we came here. You know that much of the Russian intelligentsia has come to the West.

TJ: You arrived in New York?

DT: Yes. We lived in New York for eight or nine months. I played in the Tchaikovsky Chamber Orchestra, one the famous freelance orchestras, and some chamber groups. Then I auditioned for the Seattle Symphony and was accepted.

TJ: How long have you been in the United States.

DT: I came on November 7, 1989, the day of the October Revolution in Russia, the most important official holiday in Russia, which makes it easy to remember.

TJ: Did you have a chance to read my unpublished essay, "Is There Such a Thing as a Wrong Interpretation?" [In this essay I propose three guiding principles: 1. Play with good rhythm 2. Follow the composer's instructions 3. Play in a tempo such that the written time signature is recognized.] What did you think?

DT: I think that all means, including rhythm, sound, and intonation should lead to our performance goal in making music. All of these serve this goal, and all of these are important only if you see your goal.

You were absolutely right in leaving much room for exceptions to your principles. I would make these exceptions a more central part of your discussion, and not just a footnote, however. It is the exceptions that produce different interpretations, not the technical devices you list, ie. rhythm, composer's instructions, etc. One must search for what is behind the composer's instructions. After all, the notes are just the beginning. I would accentuate different aspects of the same things in your article.

TJ: What is your goal when you perform?

DT: To make the performance interesting and exciting.

DT: For myself and for the listener.

TJ: How far will you go to do this?

DT: There is no judge except yourself. Personally I don't see any limitation.

TJ: Let's take an example of the recent performance of the Schubert Arpeggione Sonata where Yo-Yo Ma used continual rubato when he played. Did you think that that was appropriate?

DT: Absolutely. As I listened, I did not think about appropriate or inappropriate. It was not important. Of course you may analyze a performance. But if you are involved in the music, and if you follow the musical development, the rest is not important. Obviously, you may concentrate on the details and how it was done, but this is a totally different story. You look from a totally different attitude. You may look at how wonderful Yo-Yo Ma's thumb position was in his encore, but is it really important after all? No. It was all to serve the musical performance.

TJ: His performance was very genuine?

TJ: Are there famous musicians who are not genuine, who are more self-serving in their performance?

DT: It's always a question of talent. Some people have incredible talent, some normal talent, and some technical talent. And everyone explores his own road. For example, some cellists are not inspired by music, but are inspired by playing fast or playing with a big sound or other technical aspects. But their phrasing is artificial. You always recognize it by just feeling that something is not right, not natural.

TJ: Do you think that there is such a thing as a wrong interpretation?

DT: Always related to your personal taste, experience, and expectation. I don't think you can objectively say that a performance is wrong or right.

TJ: So you don't think it ultimately matters?

DT: Right. It's so shaky. Specifically, let's take Heifitz, who played with so much rubato that sometimes he played a different rhythm. Was it a bad interpretation? Probably not. Because it was not important at that moment. He was totally involved in his performance. Analyzing this is impossible, or maybe possible, but very theoretical.

TJ: Do you therefore think that audiences should be passive and unthinking spectators?

DT: It depends. For the audience, it's a great task to listen to the music, to follow the musical ideas and development and to be emotionally involved. If you listen and do not respond emotionally, then you are probably doing something wrong. You are probably analyzing too much. The mind is not a good judge when you are listening to music. Your heart, intuition, and emotions are the best judge.

TJ: So basically, if you like it then it is good, at least for you.

DT: I don't see any other way we can judge a performance or any piece of art. I'm not talking about narrow aspects of music like an audition, which is not a performance, where you display your professional qualities such as intonation, rhythm, sound, and phrasing to a certain extent.

TJ: What about once you get in an orchestra, what are your priorities. When you are part of an orchestra, one of ten cellos, do you feel that your own artistry is a priority? Or is it your job to blend in?

DT: I think it's a combination. And again, I am inspired by the music, rather than just the cello part. But sometimes we play music I enjoy less and then it's difficult. But I cannot like all music written.

TJ: As a teacher, do you have any central themes in your lessons. For example, James Buswell, a violinist, talks about looking at the original score before one plays a piece. Casals often talked about intonation. What do you emphasize in your teaching?

DT: I try to instill in my students a love of the music and the cello. On the technical aspects of cello playing, I stress to the students that most of the time they are working too hard to get a sound from the cello. They don't rely on the bow. They try to force a sound out of the cello, which usually doesn't work.

Also, my approach is to give as broad a look as possible at the music. We analyze the pieces in terms of form, style, harmony, imagery, musical ideas, etc. Most of my students don't have any theoretical base, so I try to combine as many elements as possible in my teaching.